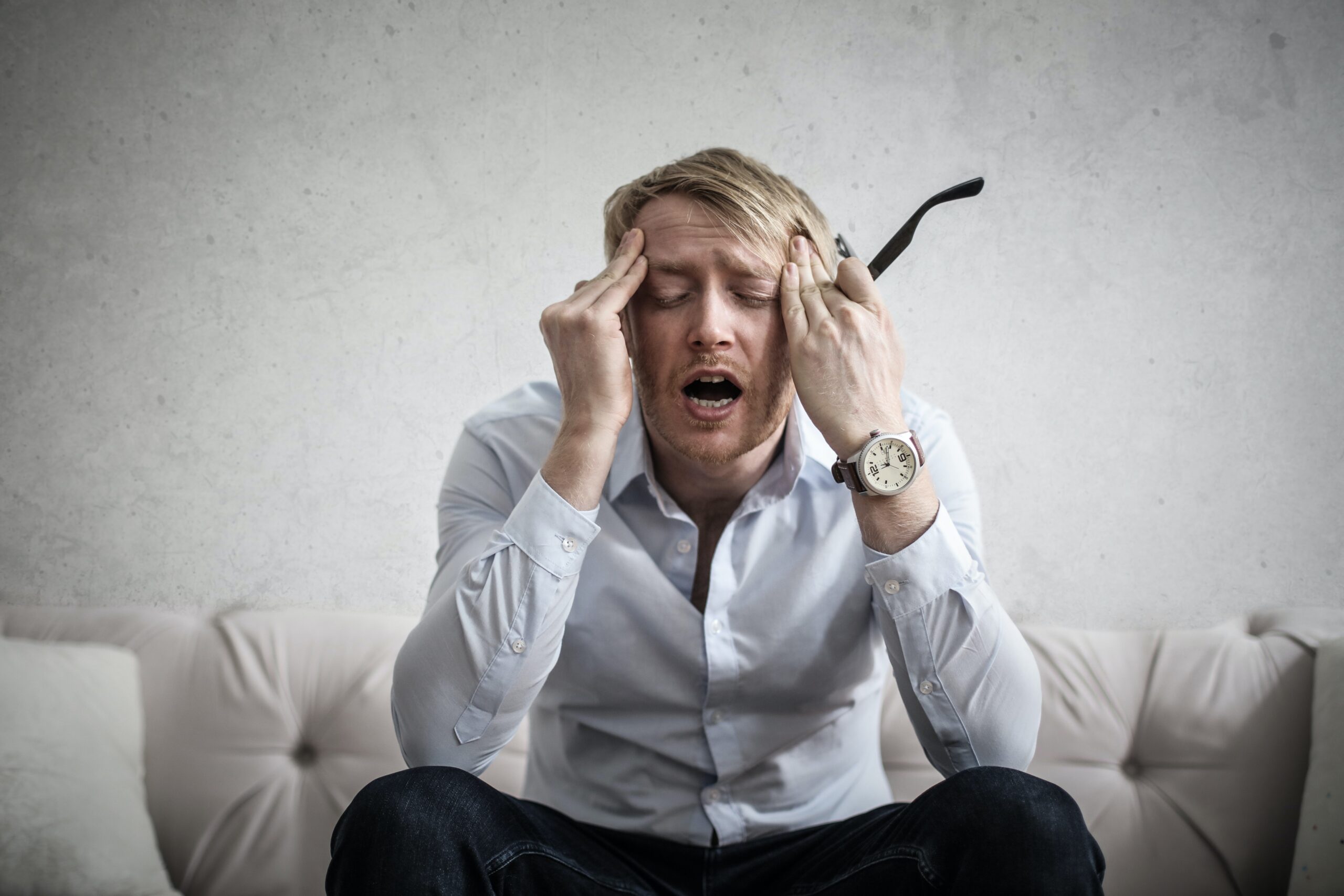 11 Common Migraine Triggers – Avoid Them Like the Plague!
If you’re one of the millions of people who deal with regular migraines, then this article is for you.
Everyone has different migraine triggers, and identifying them is one of the first steps to migraine relief.
From stress and poor sleep to certain foods and beverages, there’s plenty of stuff to avoid.
Keep reading to learn how to kick those nasty headaches to the curb once and for all…

What Makes Migraines Different Than Other Headaches?

Headaches cause pain, pressure, and aching in the head.
There are many types of headaches, but migraines are some of the most severe.
Worst of all, migraines can cause symptoms beyond just head pain, including:
Seeing spots and loss of vision are called “auras.” They act as a warning sign 10 to 30 minutes before the actual migraine attack.
Auras can also cause numbness or tingling in the face or hands, along with brain fog and unusual tastes or smells.
As the migraine wears off, you might experience constipation, irritability, yawning, neck stiffness, and food cravings.
In the end, migraines are much more than just headaches!

Who Is Most At Risk for Migraines?

According to the Migraine Research Foundation, women are three times more likely to get migraines. (1)
This is because hormones have a big effect on migraine attacks, especially when you’re on your period or you’re going through menopause.
Ultimately, the hormone swings can throw your brain chemistry out of whack and trigger migraines.
The good news, however, is that migraines usually get less intense with age.
In the meantime, do your best to avoid these common migraine triggers…

Everyone has different migraine triggers, but some are more common than others.
When you identify your triggers, you’ll be one step closer to avoiding future attacks.
Some of the most common triggers for migraines are:
Let’s take a closer look at these pesky migraine triggers…

Changing your diet is one of the best ways to prevent migraines.
In fact, research shows that 12 to 60 percent of people report that certain foods trigger their migraine headaches. (2)
Some of the most common food triggers are:
Do any of these foods bother you?
The easiest way to find out is to do an elimination diet and then slowly add foods back in one at a time.
Step one is to cut out everything that’s known to cause migraines for a couple of weeks while your body adjusts.
Next, step two is to add each trigger food back in one at a time.
Step three is to keep a log of how your body responds.
Chances are, you’ll find at least a few foods that are obvious migraine triggers.

According to one recent study, roughly a third of people report that alcohol triggers their migraines. (3)
Alcohol is a toxin that wears down the liver and promotes inflammation throughout the body.
Plus, it leads to dehydration and electrolyte imbalances, both of which are terrible for headaches.
Red wine seems to be one of the worst types of alcohol for migraines, although other types of alcohol can be just as bad.
However, it really depends on the person…
In the above study, red wine was more than twice as likely to trigger headaches in women than in men.
Ideally, you should cut alcohol out of your life entirely.

Excessive caffeine use can trigger migraines in some people.
That’s why it’s a smart idea to greatly reduce your caffeine intake or cut it out altogether.
Caffeine isn’t just found in coffee and tea, it’s also hiding in soft drinks and energy drinks.
If you’re already a heavy caffeine user, be prepared for headaches from caffeine withdrawals.
Hang in there, though, because the grass is always greener on the other side.

Do you drink enough water throughout the day?
What about eating enough food?
In the chaos of a busy day, it can be easy to forget to eat and drink.
Dehydration can lead to dizziness, confusion, and headaches.
One recent study found that low fluid intake was connected to about 40 percent of migraine attacks. (4)
Similarly, research shows that skipping meals is linked to migraine attacks. (5)
Always carry a water bottle and try to drink at least two liters a day.
At the same time, avoid skipping meals for long periods of time.
You’ll be surprised how much you can reduce your migraines by eating and drinking more consistently.

If you take prescription drugs more than 10 days out of the month, it could trigger migraines.
This is called Medication Overuse Headache (MOH) and it’s one of the most common factors in migraine attacks.
Painkillers, like opioids and butalbital, are some of the worst culprits.
However, over-the-counter painkillers, such as ibuprofen (Advil) and acetaminophen (Tylenol), may also cause more headaches over time.
Instead of depending on medications, it’s important to focus on preventative steps like diet and lifestyle changes.
After all, medications are only a band-aid for symptoms, but they don’t actually treat the cause.
Talk to your doctor about transitioning off of medications and going the natural route.

Chronic stress is a migraine trigger for 50 to 70 percent of patients. (6)
That’s because stress boosts hormones like adrenaline and cortisol and causes imbalances in other hormones throughout the body.
Before long, you’re low on testosterone and estrogen and high on stress!
At the same time, stress weakens the gut lining.
This is terrible for mental health because the gut produces most of the body’s serotonin: a feel-good neurotransmitter that supports mood.
Plus, a weak gut lining allows inflammation to sneak into the bloodstream.
Life can be stressful, but you can reduce stress with the right lifestyle choices.
Some great ways to reduce chronic stress include:
Although these strategies won’t eliminate stress, they can normalize the body’s fight-or-flight response and reduce the risk of migraines.

Sleep is your new secret weapon in the fight against migraines.
What makes sleep so darn important?
In a nutshell, sleep is when the brain and body repair damaged cells and sweep away toxins.
When your sleep is poor, the cells don’t have a chance to fix themselves.
Ultimately, this makes you more prone to migraine attacks.
In fact, people with insomnia are significantly more likely to experience migraine headaches.
On the flip side, many people find that quality sleep helps relieve their migraines. (7)
Here are some quick tips for better sleep:

When you have a rocking migraine, nothing is better than a quiet, darkroom.
That’s because migraines are very sensitive to light and sound.
Some people find that bright, flickering lights and loud sounds trigger their migraines.
One study in the journal European Neurology found that even brief exposure to sunlight can trigger migraines in some people. (8)
Lights and sounds are more likely to trigger headaches if you’re already sleep-deprived, dehydrated, hungry, or stressed.

Certain smells can spell trouble for migraines.
That’s because odors activate nerve receptors in the sinuses that may trigger migraine attacks.
It’s usually very specific smells, whether it’s certain foods, cigarette smoke, or strong perfumes.
One study found that people with anxiety and depression are significantly more likely to have migraines triggered by odors. (9)

Wait… can the weather really affect migraines?
As it turns out, the answer is yes!
For example, one Brazilian study found that migraines can be triggered by sudden changes from hot to cold or sunny to rainy. (10)
At the same time, a separate study found that thunderstorms are strongly linked to migraine attacks.
Researchers aren’t exactly sure why weather changes trigger migraines, but they think that it may have to do with fluctuations in air pressure.

Regular exercise works wonders for migraines, but too much intense exercise might actually make headaches worse.
In fact, one study found that 38 percent of migraine patients experience exercise-triggered attacks. (11)
The moral of the story is, there’s no reason to push yourself too hard in the gym!
Instead, do more low-intensity exercises and never work out to exhaustion.
If you have any more questions about migraine triggers, feel free to reach out to us at Complete Care Health Centers.
We’re happy to answer any questions you may have.