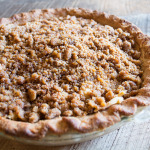 Fall is here and nothing smells better than a fresh baked apple pie! Just in time for the holiday season, Melonie has whipped up an Apple Pie that we can all enjoy!! Not something you want to make every day but on those festive occasions when friends and family gather round, it’s something special!!

Directions
1. In a large sauce pan at medium heat, cook apples in ½ cup water, with lid on, stirring occasionally, until slightly softened (about 10 minutes).
2. Add raisins, honey, stevia, cinnamon, and nutmeg.
3. Mix arrowroot with ¼ cup of water and stir into mixture.  Continue to cook until mixture thickens and apples are tender.
4. move from heat and stir in almond extract. Fill pie crust with mixture.
5. Add top crust and seal along the edge.  Cut several slits in top crust to allow steam to escape.
Bake at 400 degrees F for 18 minutes.
Optional: Apple Crumb Pie
Make apple pie as directed and replace top crust with chopped walnuts or pecans.

Remember: if you are committed to losing weight or reducing fasting blood sugars, partake of these higher carb recipes sparingly. While they are made with healthy ingredients their higher carb content may slow up weight loss and reduction of blood sugars.