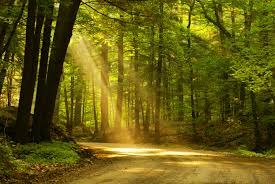 Get Outside and Change from the Inside Out

Children who spend too much time inside have nearsightedness and the one consistent factor for prevention is how much time they are outdoors. If being outside prevents myopia, imagine, what else it can do for you? Have you ever had “cabin fever?” The feeling that if you do not get out of the four walls you are in, you might lose your mind. The term, “cabin fever” first surfaced in 1918. It may have had to do with sailors who spent too long in boat cabins or what early settlers experienced being restricted to small cabins.  These days, people move from car to office to house, so they often spend most of their time indoors. According to The National Human Activity Pattern Survey conducted in 1992, Americans spend 87% of the time in a building and 6% in a car.

Researchers Gregory N. Bratman et al conducted a study on how walking may reduce worry and stress. They studied whether urban versus natural environments affected rumination or mental stress. The results were clear that walking is a stress-reducer, and 90-minute walks in natural environments were most effective at reducing heightened cognitive stress. Another study published in Scientific Reports magazine also supports the idea that getting outside at least 30 minutes to green spaces can prevent health conditions like heart disease.  How much your health improves depends on your “dose” of green. In an emerging field called “Forest Medicine,” the effects of adequate exposure to trees is studied. In Japan, there are numerous forest medicine studies concluding health benefits like decreases in cortisol levels, nervous system activity, blood pressure, heart rate and improved immune system response from being with trees.

So, if you want to establish a new level of calm that offers health from the inside, get outside to enjoy a beautiful, lush-green environment filled with trees to stimulate internal change.